Patents are at the interface between technology and law. This article provides a critical review of four high-profile cases from 2020 in which pharmaceutical patents were challenged in UK courts. The cases selected in this review involved issues of ‘sufficiency’, ‘novelty’, ‘inventiveness’, ‘plausibility’ and ‘infringement’. The first case is a dispute between Regeneron Pharmaceuticals and Kymab Ltd over Regeneron’s patent for a transgenic mouse platform. The second case concerns Pfizer’s patent for its pneumococcal vaccine Prevnar®13 and the alleged infringement of this patent by Merck Sharp & Dohme. The third case concerns the validity of a patent belonging to Neurim Pharmaceuticals Ltd relating to a slow release formulation of melatonin for the treatment of primary insomnia. The latest case is a dispute between FibroGen Inc. and Akebia Therapeutics over FibroGen’s patents for hypoxia-inducible factor prolyl hydroxylase (“HIF-PHI”) enzyme inhibitors for use in the treatment of ‘anemia. The article aims to focus on the technology behind patents and provide an overview of how science interacts with law in the context of patent enforcement and infringement.

Patents are at a point where science and technology overlap the law. Although it is necessary that lawyers, notaries and judges working in the field of patents all have a good grasp of the technology in the sectors in which they work, very often the scientific researchers in these sectors are not any patent exposures, or their exposure is limited to the early stages of a patent’s life as inventors helping to prepare patent applications and providing input during the prosecution of grant applications. Researchers will very rarely, if ever, be involved in patent litigation.

The following is a review of a selection of cases from 2020 in which patents relating to pharmaceuticals have been challenged in UK courts. The authors of this review hope to provide pharmaceutical researchers with insight into how science interacts with the law when enforcing patents.

The authors do not intend to provide an in-depth analysis of the legal aspects of the issues, but rather to focus on the technology at issue and identify how the basic principles of patentability and infringement have been applied in the context of the issues involved.

In the early 2000s, it was widely recognized that antibodies (immunoglobulins) developed using mouse (murine) platforms could be used to treat human diseases. Antibodies are made by B cells and contain four polypeptide chains consisting of two identical “heavy” chains and two identical “light” chains to form the characteristic “Y” structure of the antibody (Fig. 1).

The regions within these chains are called constant (C), variable (V), diversity (D) and junction (J) as shown in Fig. 2. The heavy chain of an antibody has V, D, J and C segments while the light chains have only V, J and C segments. These segments are encoded in the immunoglobulin gene loci and undergo recombination during B cell maturation to produce unique antibodies to target specific antigens (Fig. 2). 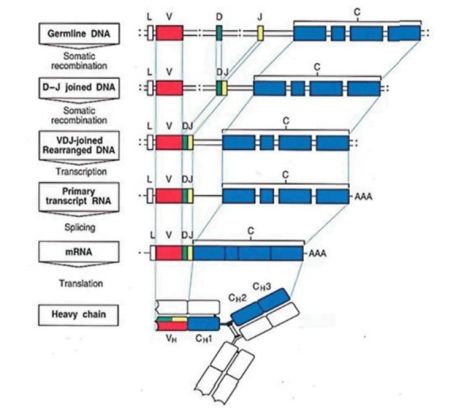 Fig. 2. Diagram of the process or rearrangement, then transcription and translation of the heavy chain of an antibody.

Antibody therapies that had been approved for therapeutic use at this stage (for example, murine antibodies, chimeric antibodies, and humanized antibodies) were known to cause undesirable side effects due to the human anti-mouse antibody response ( Hama answer).

Fully human antibodies produced in transgenic mice are less likely to be rejected by a patient’s immune system and are more desirable, but said transgenic mice must have a suppressed immune response, making them immunologically ill and less suited to the antibody development.

The litigation concerned two European patents filed by Regeneron Pharmaceuticals, Inc. in 2002 which described genetically modified mice having a hybrid genetic structure called “reverse chimeric locus” (Murphy et al., 2002a; Murphy et al., 2002b). This is where the mouse variable immunoglobulin gene segments are replaced with human variable immunoglobulin gene segments, while maintaining the mouse constant region segments. Such mice produce antibodies that differed from other chimeric antibodies known at the time (eg, antibodies with mouse variable regions and human constant regions). Maintaining mouse constant regions was found to allow for better antibody compatibility with the mouse immune system and improved immune response, approaching that of wild-type mice. In subsequent steps, B cells producing the desired antibodies could be eliminated and genetically engineered to replace mouse regions with human regions, thereby producing fully human antibodies for use in therapy. The inventive concept is best described in the following claim which was central to the proceedings (claim 1 of Murphy et al., 2002b):

The dispute arose when Regeneron alleged infringement of its patents by Kymab Ltd, which had developed a similar transgenic mouse platform called “Kymouse”. Although infringement was found (UK 2016), Kymab countered that Regeneron’s patents were invalid as insufficiently disclosed (Fig. 3).

Sufficiency can be described as a bargain between a patentee and the public, whereby the patentee obtains a monopoly for a new invention in return for disclosing the invention so that it can be exploited by the person skilled in the art. art, allowing others to be inspired by it. Sufficient disclosure is a requirement under the European Patent Convention and UK law (EPC 2000; UK 1977a).

The content of this article is intended to provide a general guide on the subject. Specialist advice should be sought regarding your particular situation.